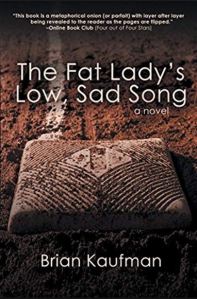 Is there a better setting for hopes and dreams than a baseball diamond? Probably not.

Brian Kaufman exploits the sport to great effect in The Fat Lady’s Low, Sad Song. The title will tell you where this one is headed or at least how it will end. The novel starts in a bleak motel room. Parker Westfall, wannabe big-league ball player, is six beers down. He wants to play with the Mets. He gets a call from the Fort Collins Miners, an independent ball club. Double-A, two rungs down from the bright lights.

The word on Parker is that he has a year or two left. He might be out of shape. Parker is trying to get himself fired up for a team that can’t afford soap for the showers. “He’s hit bottom. The majors have given up on his as a prospect. He hit 31 home runs, and no one noticed.”

Soon, it looks like gimmick time. The team is bringing in a girl to pitch. She is Courtney Morgan. “Her eyes are a wink and murmur of something dark.” She throws a knuckleball and the team wants Parker Westfall to “smooth the way” for her as a teammate.

Is Courtney’s hiring a publicity stunt? Or does it mean a genuine chance for the team to improve? Smartly, Kaufman keeps it real. (At every turn, in fact, Kaufman takes the unsentimental choice; grit over cheap tricks). Courtney is not an immediate sensation. She needs coaching and guidance, and thus begins a long battle to gain her trust and show her how to improve her effectiveness on the mound. But there’s more to The Fat Lady’s Low, Sad Song than Courtney’s integration into the world of snarky, joking jocks.

There are bar fights, on-the-field scuffles, strange promotional events, road trips to Utah and Nebraska and beyond, and events from the real world (of true life and death) that play a role, too. There are losing streaks, there are winning streaks. The chapters are quick; Kaufman packs a lot of story into 187 pages—to great effect. Kaufman shifts gently from Parker’s point of view to Courtney and also to the Miners’ new manager, Grady O’Connor.

“Grady stands at the far end of the dugout, one leg on the steps. His team is up by two runs. The crowd is small, but vocal. The summer sun won’t set for another 30 minutes, but the evening air is crisp. Pink and orange clouds hover over the mountains to the west, painting the sky with color. He removes his cap, allowing the breeze to cool his forehead. Grady scowls and spits sunflower shells.”

Kaufman’s matter-of-fact style is also a cool breeze. Kaufman steers clear of clichés and easy choices. Think wonderfully messy “Bull Durham,” not the too-nifty structure of “The Natural.” Like Scott Glasser’s excellent Battle Creek, Kaufman’s minor league landscape is a crossroads. Not every career arcs up. Not every fly ball is a home run.  A terrific book about baseball and much more. The truth, as Parker knows all too well, is a “great deflator.”

This entry was posted in Books and tagged baseball, fort collins, minor leagues. Bookmark the permalink.