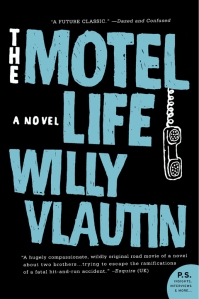 Where is the Willy Vlautin fan club? I’d like to join. I read Lean on Pete first. I found it mesmerizing. Vlautin writes like he’s searching for the unvarnished, cold truth in each moment. With Lean on Pete and The Motel Life, he writes about overlooked characters—life on the raw, bitter edge. One other review (in The Washington Post) called Motel Life understated and, in a nutshell, that’s it. He’s the dry-eyed documentarian, the novelist with the matter-of-factness of a narrator from a Ken Burns flick. Looking for flashy prose? Seek elsewhere. Vlautin’s touch as a musician (he writes and sings for the band Richmond Fontaine) is evident in the rhythms and flow.

But that doesn’t mean these books lack energy. They don’t. They start with fairly humble desires—to get somewhere or to find somebody or to leave whatever situation you’re in. Because, certainly, things have to be better. Somewhere. And they are both very much about how individuals and strangers help each other—or do not.

Like the main character in Lean on Pete, the narrator of The Motel Life is in his teens but you’d never call either title “young adult” because, well, I’m not sure. Because they aren’t marketed as “YA”? I’d read more “YA” if they were along these lines, young men dealing with grown-up challenges and trying to find a place to hold on and pull yourself up in a gritty world that doesn’t care a lick about your situation.

In The Motel Life, Frank Flannigan is looking back. He starts remembering a day his brother declared, bluntly: “Frank, my life, I’ve just ruined it.” Brother Jerry Lee, in fact, was driving “a little” drunk. It was 4 a.m. It was snowing. But a bicyclist “comes out of nowhere” and a young boy is killed.

And then Frank recalls (we’re on page 9) that “we did the worst imaginable thing you could do. We ran away. We just got in his beat-up 1974 Dodge Fury and left.”

The novel becomes a combination of life on the run and changing-developing relationship between the two brothers. No spoilers here. There’s hope and then hope fades. There’s an ex-girlfriend. A dog gets adopted. There’s a plenty of drinking, a series of beat-up motel rooms, a big boxing match, a bet and Frank’s ability to spin fanciful stories to entertain his brother.

And every moment feels real, locked in. One review of the movie version (Emile Hirsch, Kris Kristofferson, Dakota Fanning) called it a thriller. A few tense moments, yes, but not so sure about “thriller.” The novel is quiet, cool, spare and unforgettable.

This entry was posted in Books and tagged Fiction, review, Willy Vlautin. Bookmark the permalink.