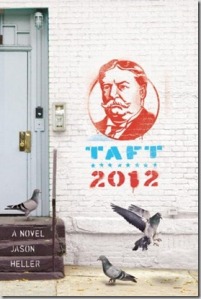 I’d vote for the guy.

He’s down-to-earth and he tells it like it is.

I finished Jason Heller’s TAFT-2012 at the same time as the United States Congress was (once again) locked in an epic battle and brought the world economy to the brink over a childish tantrum thrown by certain U.S. Representatives who wanted to pick a fight over the Affordable Care Act.

While it’s painfully obvious the political landscape is sorely lacking in straight shooters, reading Taft made the pain worse. And real. Under Taft? Can’t picture it.

Covered in mud, William Howard Taft literally resurfaces from a long hibernation. He’s an “oversized mammalian figure” behind the White House South Lawn Foundation and he approaches a press conference underway on the lawn.

(This detail from the Classified Secret Service Incident Report, Agent Ira Kowalczyk. Heller intersperses this tale with transcripts of radio and television shows; a biography-in-progress of the 27th president; personal notes; poll results; newspaper stories; Twitter feeds; letters; on and on. The approach keeps TAFT-2012 fairly rocking along.)

When he re-appears, as the would-be biographer notes, the person in question “was either the oddest terrorist attack in history, the stupidest reality-show prank imaginable … or it was Taft.”

So Taft is checked out. He’s no impostor. He doesn’t remember a thing. He thought was on the way to Woodrow Wilson’s inauguration and simply wakes up, like a bear from a long winter.

From there, TAFT-2012 is a romp. The president who “was so honest a politician, he ended up infuriating every single interest group that had ever supported him” is back.

Taft gets acquainted with flight and television. He observes how society has changed (and how it hasn’t changed at all). He eats barbeque. He eats and snacks. He gets gawked at. He travels to Cincinnati to visit the home of his great-great granddaughter, who is a sitting U.S. Congresswoman, and then to Chicago for a memorable New Year’s Eve bash.

Slowly, he gets pulled into the political vortex, encouraged by “Tafties,” and the question becomes whether he will want to return to the White House, a place he once referred to as the loneliest place on earth.

There are plenty of targets in Heller’s sights as Taft’s campaign gets in full swing, from the thin and simplistic nature of the media today to the quality of food produced by multinational corporations. At the end, Taft delivers a spot-on speech that should be handed out to every elected official headed to the nation’s capital, a thoughtful breakdown of what’s wrong with American politics today and, certainly, the very words that William Howard Taft would utter if he could crawl his way back to today.

For any future politician who wants to run on the approach outlined in Taft’s speech (Chapter 29), I’m in.