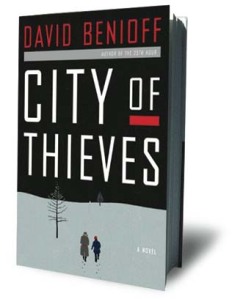 A war story with a pleasant polish, City of Thieves is entertaining and pulled me along in fine fashion. The Siege of Leningrad setting is compelling and the over-arching premise is intriguing.

Ultimately, I felt like I’d watched a generic Hollywood movie. Given the brutality of the siege, I was expecting more grit.

There’s a built-in “clock” in the plot—the idea that 17-year-old Lev Beniov and a slightly older brother-in-punishment Kolya must retrieve a dozen eggs for a colonel who wants to have a wedding cake for his daughter. If the pair succeeds, they will avoid being executed.

So City of Thieves becomes a road trip yarn as the two bounce around and take in the gloomy surroundings and decide how best to manage their situation and how best to find the eggs. But the egg hunt fades out for a long stretch. They banter. And banter some more, mostly about sex and how long it’s been since their digestion has worked normally. There’s a remote farmhouse and four girls and jazz records and dancing.

The fate of Lev and Kolya fades. Kolya plays the world-wise seen-it-all guy who tries to school the younger Lev. Lev doesn’t seem bothered by much—and neither are we.

The telling is matter-of-fact. We see what Lev sees, but we rarely feel what he feels.

“A dead man sat in the straw beneath the nesting boxes, back against the wall, limbs stiff and splayed like an abandoned marionette. He had a long white beard, the beard of a nineteenth-century anarchist, and skin like melted candle wax. An antique shot gun still lay across his lap. From the looks of him he’d been dead for days.”

Lev describes the scene as a “grim tableau” and only acknowledges the guilt of entering into someone else’s “private misery” despite the fact that this is in a city where there are dead “everywhere.”

Compared to, say, Nick Arvin’s Articles of War (to name one), City of Thieves never had me worried about the two soldiers or their fate. The sentimental sheen throughout the storytelling—and Benioff is a Hollywood screenplay writer—suggested a sentimental ending. I was not disappointed.

This entry was posted in Books and tagged city of thieves, david benioff, leningrad, war novel. Bookmark the permalink.